With the launch of the new Kuroshio ’64, Citizen not only offers a vintage inspired watch at an affordable price, but also pays tribute to an exceptional milestone in watchmaking history. Launched in five different models with distinctive dial colours, on bracelet and leather straps, these watches pay tribute to the pioneering spirit of Citizen in wristwatch innovation, inspired by the iconic Parawater of 1959.
Paying tribute to the technical milestone of the first water resistant watch from a Japanese watchmaker in 1959.
While it is normal to expect watches to be water resistant these days, this was not the case in the first half of the 20th century. Certainly, while the water resistant watch had already been invented and patented in the 1920's by the Swiss, these were, by and large, not widely available to the masses.
To this end, watches were still considered delicate objects that had to be handled with care, especially around water. A simple everyday task such as washing hands required one to take off one's watch in order to prevent damage, and using it while swimming was definitely something that was just not done.
With a history of continually making watches that would be useful to their owners, Citizen had, along with other watch companies in Japan, already begun research into the subject of making water resistant watches with excellent performance. Due to their early start, they were able to release their watch ahead of other companies in 1959.

The Parawater, the result of Citizen’s research efforts, was the first completely water and dust resistant watch by a Japanese watchmaker, and it was so named due to the technical innovation of water resistance that was the highlight of the watch, with the combination of the word “para” meaning protection and “water” to indicate that the watch was protected from water. To underscore the importance of this innovation, the name of the watch, Parawater, was placed on the dial where the logo of the brand would normally be.

The Parawater was rated to a depth of about 5 bar (50 metres), and it achieved its level of water protection due to the use of O rings that were made of a special rubber (butadiene acrylic nitrile copolymer). One large O ring was mounted on the case back, and this in conjunction with an extensively modified crown and tube assembly each with smaller O rings, made sure that the movement of the watch was completely sealed from water and dust.

The original Citizen Parawater from 1959, the first Japanese water resistant watch ever made

The original technical plans of the Citizen Parawater show the extensive use of O rings that protect the watch against water intrusion.
The benefits of this technical innovation could not be overstated, as owners of the Parawater could wear their watch while swimming or to the beach without fear. On subsequent watches, the success of the watch led to the acceleration of development in the area of water resistance in watches generally, and for Citizen, was the foundation of their line of professional diving watches that would come in the 70's.

One interesting detail that ties the Parawater to the new Kuroshio ’64 is that the retail price of the watch at the time of release was JPY 6,000, which was affordable given that the starting salary of a highschool graduate at the time was about JPY12,500.
Telling the world - the Kuroshio ’64 project
With the introduction of the Parawater in 1959 being the groundbreaking innovation that it was, Citizen embarked on a series of promotional campaigns over the years that followed, with the most extreme tests that a watch could face in water.
The first extreme test, though not officially organised by the company, took place in 1962, when two Citizen Parawater watches accompanied Japan's most famous yachtsman, Kenichi Horie, on his successful solo crossing of the Pacific Ocean on the “Mermaid” Yacht. Just 23 years old at the time, Horie was the first man in history to make a non-stop solo crossing of the Pacific Ocean.
Upon his return, Mr Horie, who had been extremely satisfied with the performance of the Parawater watches that had accompanied him on his trip, donated one to the Citizen company. In return and in gratitude for receiving a watch of such historic importance, Citizen presented Mr. Horie with a new “Citizen Chronometer”.

While this “test” might have showcased the real-world performance of the Parawater by a sportsman using it in extreme situations, more were to come that would further demonstrate what the watch was truly capable of.

In 1963, the Japan Maritime Self-Defense Force and the Tokyo University of Marine Science and Technology were about to embark on an ocean current survey, with bottles dropped in the sea with a survey form contained within, for people who picked them up to send back. This survey was modified in conjunction with Citizen, as it was the perfect opportunity to do the ocean current survey and a performance test of the Parawater at the same time.

Left: A technical drawing of the test buoy, showing the Parawater mounted within that was below the waterline.
Right: The design on the buoy cover, indicating the aim of the buoy.
To this end, a distinctive bright yellow buoy was designed that was highly visible in the water, with clear indications of what it was and its research aims printed on the top side of the buoy. Each buoy also came with a Parawater watch suspended just below the water line, and instructions on how to contact Citizen by the person who found it. As a bonus and incentive to contact Citizen, the finder of the watch was allowed to keep it.

Over the course of the year, 140 buoys were launched on four separate occasions, with the furthest report of buoys found coming from Oregon in the USA and Vancouver in Canada.

In 1964, the test was extended and named “Kuroshio 64” after the Kuroshio current that flows past Taiwan and the southeast coast of Japan. For this test, 47 buoys with a Parawater watch were each dropped off the coast of the Sanin sea.

It’s interesting to note that in all the instances of found buoys, all the watches that they contained were checked and found to be functioning perfectly, which is a remarkable testament to the technical achievement of Citizen in creating the Parawater.

Seen here is the advertisement of the project in 1963. Citizen Parawater watches in their distinctive buoys are thrown overboard for the first major test in 1963.

Text: “The world’s first experiment: Citizen Parawater on the black current to America”

The Iconic Parawater reborn as the Kuroshio ’64 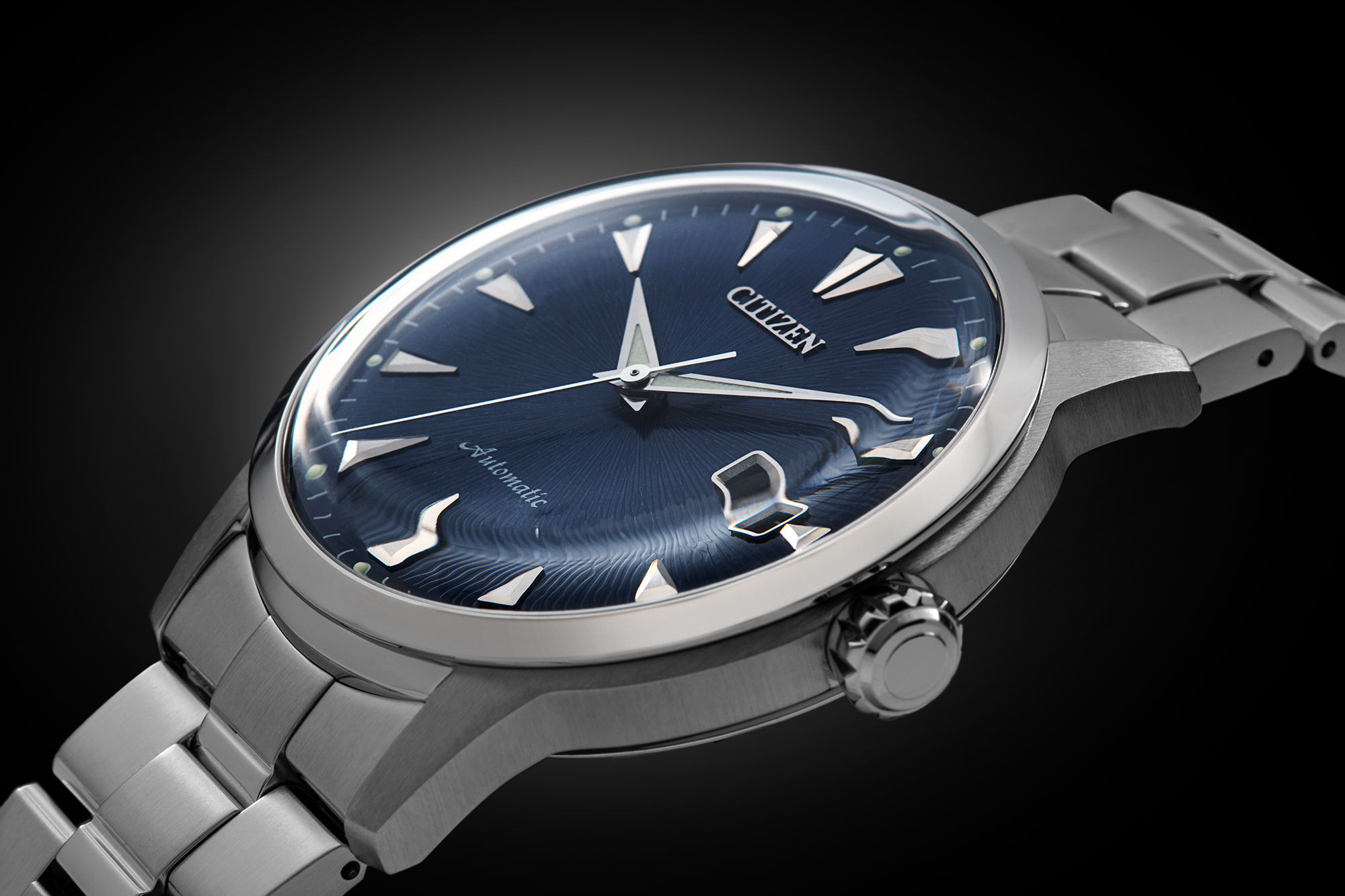 The new Citizen Kuroshio ’64 has a design that takes many cues from the original Parawater of 1959, with many similarities that are obvious at first glance, from the shape of the case and lugs, to the arrowhead hour markers, dauphine hands and domed crystal.
The modern upgrades in the design include a modern 41mm case size, a more grippable crown as well as lumed hour marker dots.

Powering the watches is Citizen’s own Calibre 8310, an automatic movement that features a useful power reserve of 60 hours and hacking seconds functionality.

Of note is the dial design, embossed with a pattern that is inspired by ocean waves, and that also adds visual interest due to the texture. As well, the dials that the watches will be launched in - dark blue, black, dark green, beige and silver white - are the various colours that the ocean can appear in. 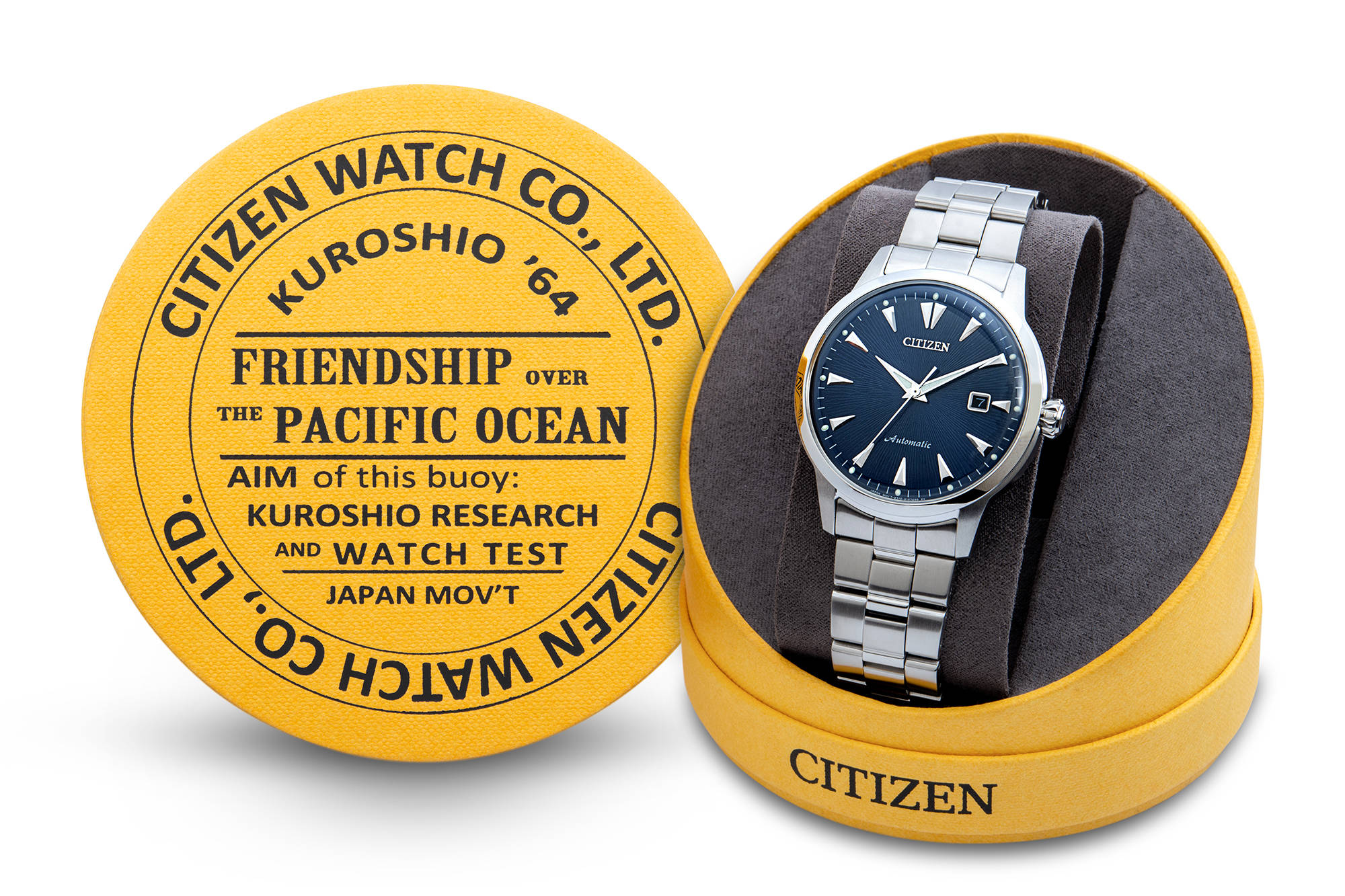 The packaging of the Kuroshio ’64 takes inspiration from the buoy design of the namesake test in 1964. 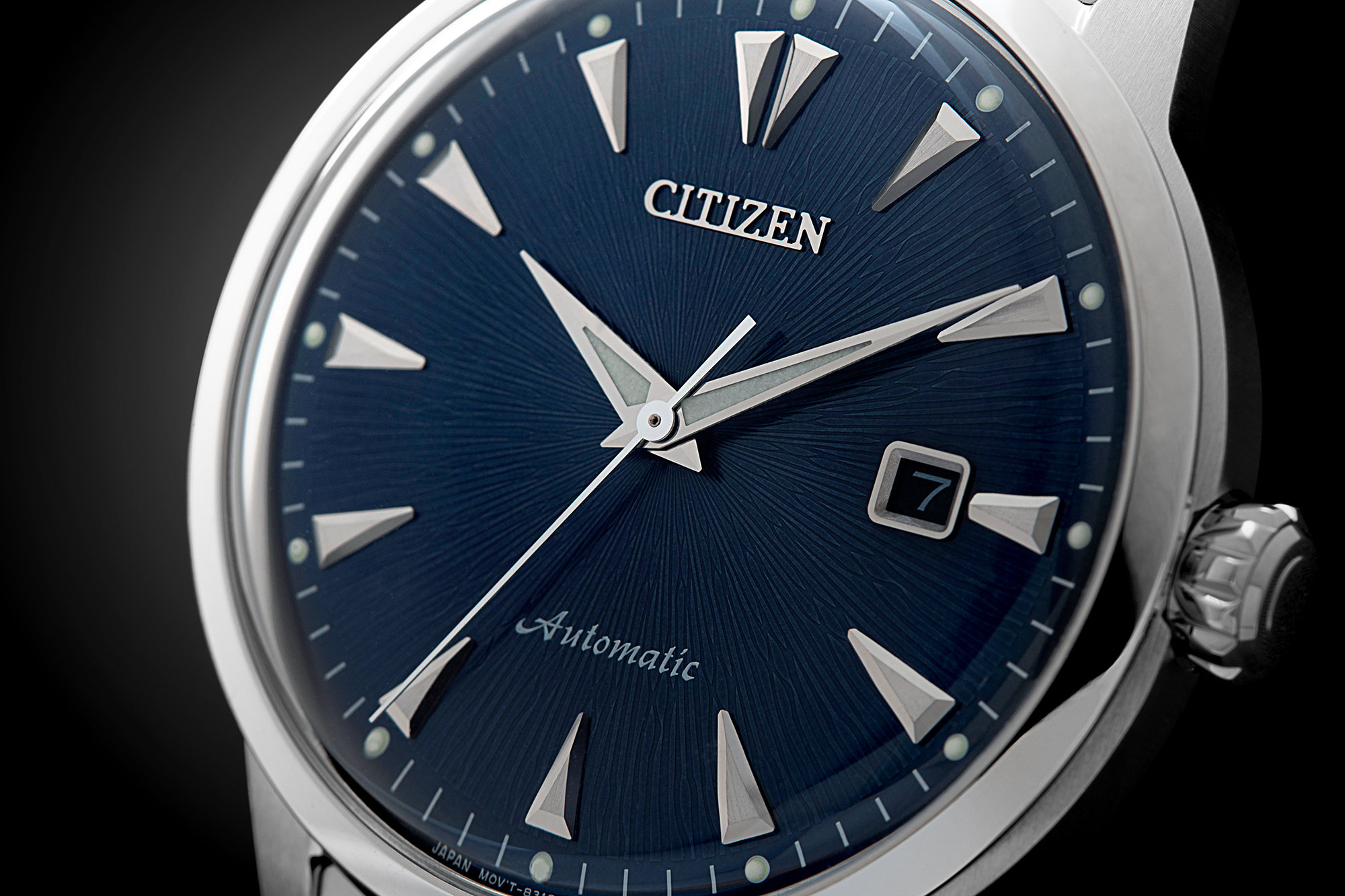 The first models that are available include a dark blue, black and silver white dial on stainless steel bracelet, as well as a silver white dial model on black leather strap and a dark green dial model on brown leather strap.
The collection will be available in Singapore, Thailand, Malaysia, Vietnam, China, Hong Kong SAR, Macau SAR, Taiwan region, Korea, Philippines and Cambodia. 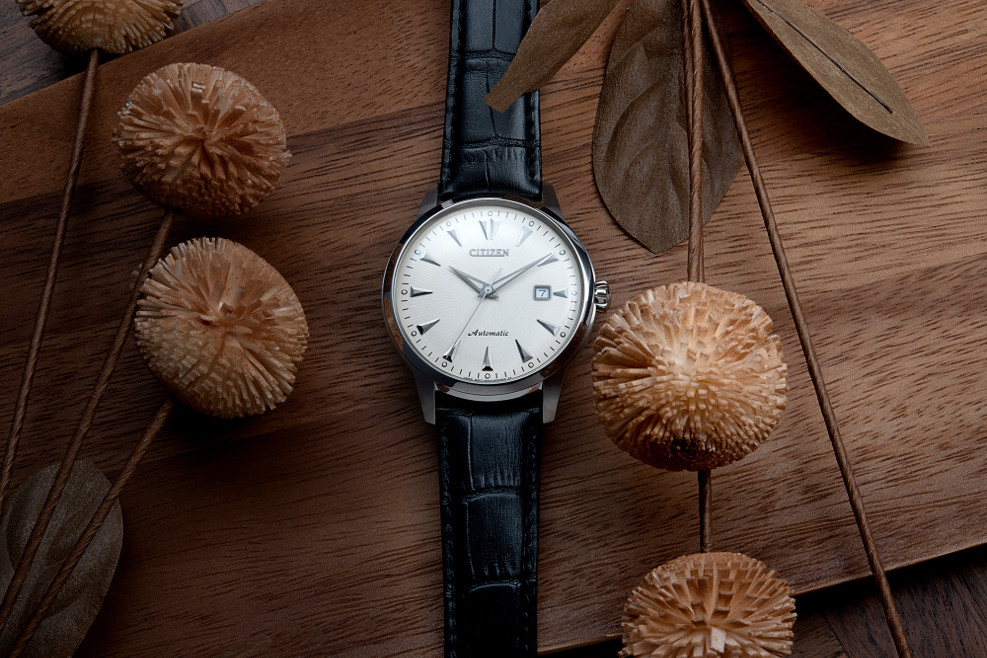 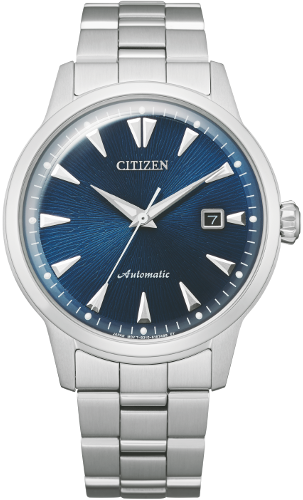 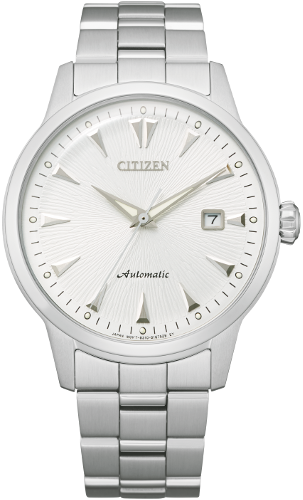 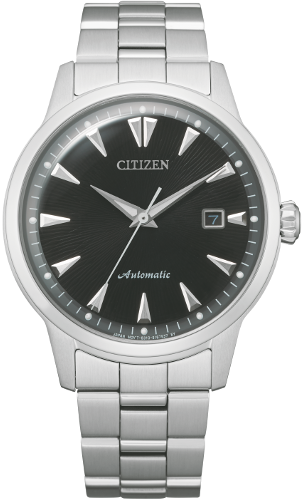 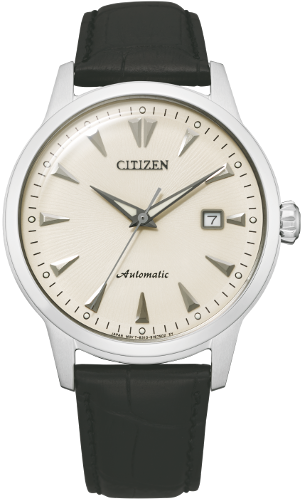 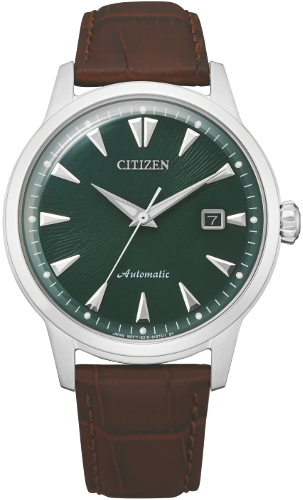 * The final design and specifications are subject to change without notice.
* Eco-Drive is registered trademarks or trademarks of CITIZEN Watch Co., Ltd.
Share:
Posted by Citizen
Back