In conjunction with the first anniversary of the NB600 Series, CITIZEN launches the new NB6008-82X, a new PROMASTER Mechanical Diver 200m with enhanced magnetic resistance, a striking green color scheme and an integrated bracelet. 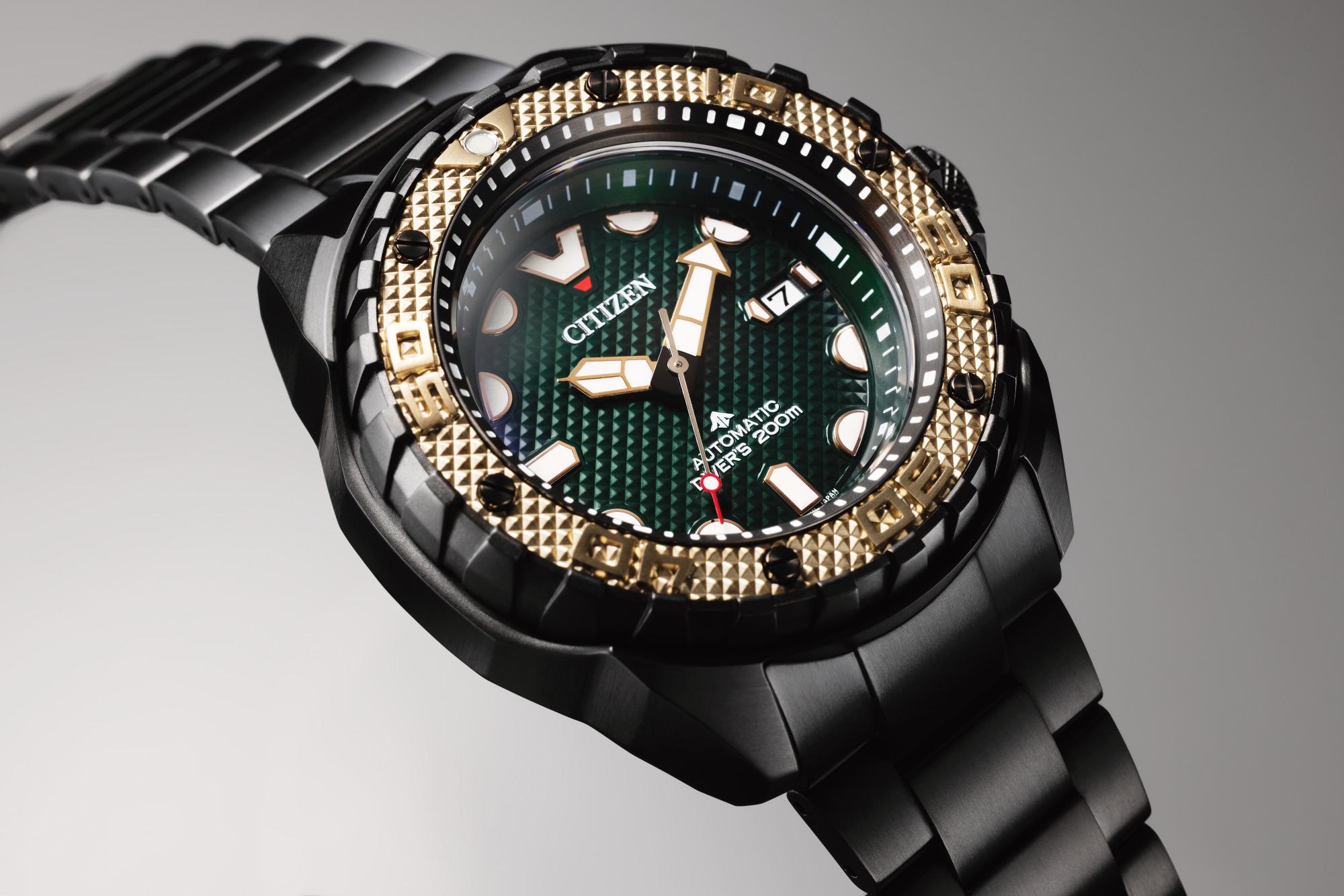 PROMASTER Mechanical Diver 200m NB6008-82X
Asia Limited Edition of 500 pcs
The magnetic resistant NB600 series
2021 was a significant year for CITIZEN as it saw the release of a number of outstanding mechanical watches in various genres and with different capabilities. One of these models was the PROMASTER Mechanical Diver 200m NB6004-08E, a watch that came with a slew of remarkable technical features not commonly seen in diving watches of its class.

The headline technical feature of the NB6004-08E was its enhanced resistance to magnetism, a result of the brand new cal. 9051 movement of the watch. This movement achieved its enhanced magnetic resistance through the use of non-magnetic materials in key areas like the balance spring and its surrounding components. This resulted in a watch that was able to resist everyday sources of magnetic fields, such as smartphones and laptops, and even aboard ships next to magnetic compasses. In fact, the watch maintains its performance as close as 1 cm away from devices that generate a magnetic field during normal use, which meets Japan Industrial Standards (JIS) Type-2 antimagnetic performance 16,000A/m. 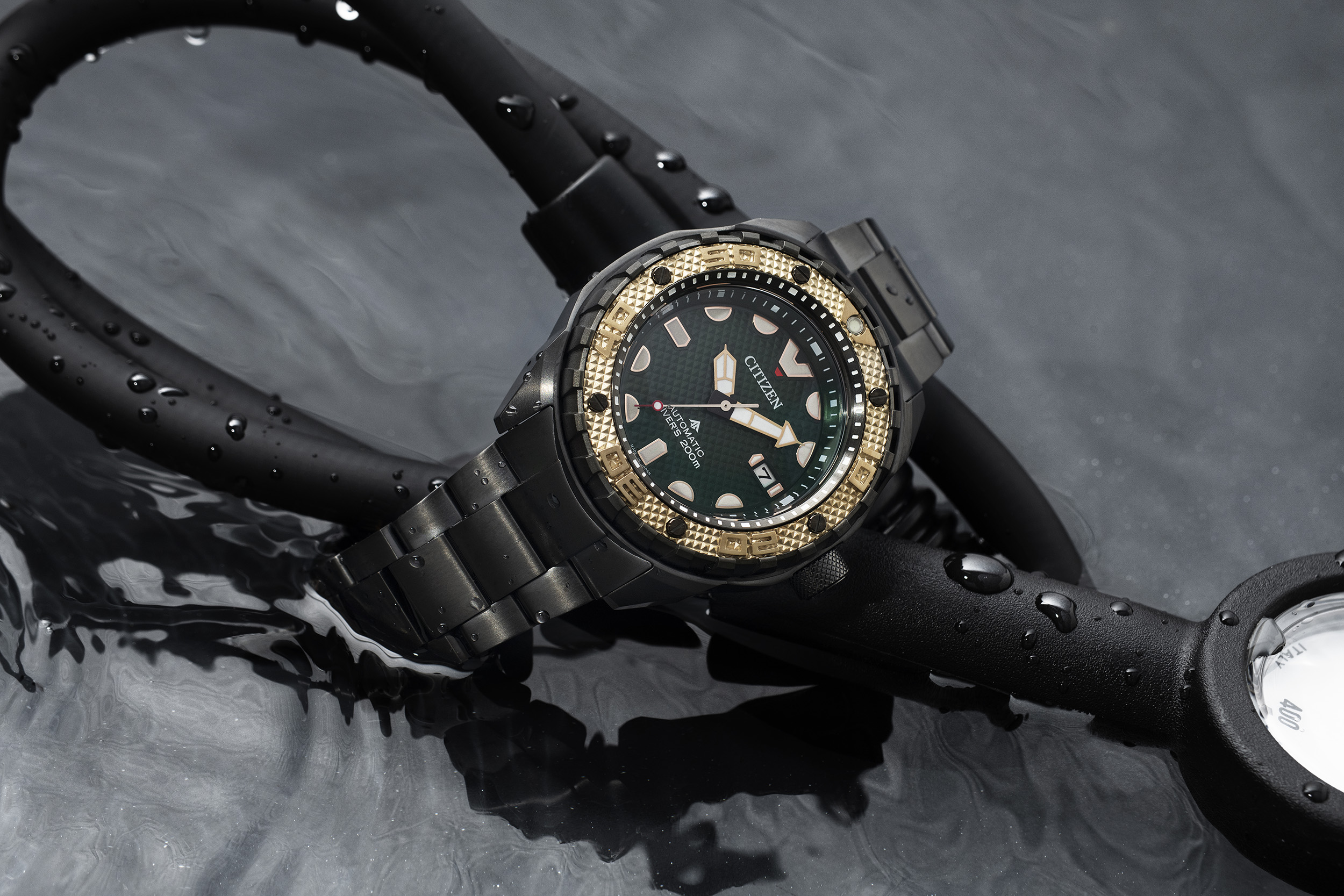 The new 500 piece limited edition model NB6008-82X for 2022 builds on the foundation of the well-received NB6004-08E with its signature magnetic resistance and strong technical features, and adds to this several premium enhancements that will surely be of interest to collectors and fans of CITIZEN’s Promaster Marine Series.
Inspired by the colors of the Green Anaconda, the largest snake in the world, the new NB6008-82X differentiates itself from the previous NB6004-08E with a dark green toned dial and matching bracelet that is complemented by a gold toned bezel. Additionally, there is also an intricate almost stud-like pyramid pattern on the bezel and the dial with shades that shift depending on the viewing angle. These details, along with the combination of colors and the bold design of the case and bracelet are a fitting tribute to the Green Anaconda, one of nature’s most powerful hunters and like its inspiration, is as comfortable on land and in water.
As a Limited Edition model, the NB6008-82X comes with numerous premium features. It is the first model in the NB600 series to come on an integrated bracelet that has a convenient micro-adjustment system and a built-in diving extension for on-the-fly adjustment when worn on the wrist or over a wetsuit.
The case, along with the bracelet of the new NB6008-82X is made of CITIZEN's proprietary Super Titanium™, a material that is at least five times harder than stainless steel, is resistant to scratches, and is lightweight and gentle to the skin for comfortable wearing. Added to this is CITIZEN’s proprietary surface-hardening technology, Duratect MRK + DLC. Further the gold bezel is protected by a combination of Duratect Gold .Due to these enhancements, every external surface of the watch is extremely scratch-resistant, allowing it to retain its looks and function under conditions of hard use and everyday life for long lasting durability.
Overall then, given that the watch is part of CITIZEN’s Promaster Marine Series, the watch is a highly competent diver with all the necessary features to perform under the most demanding of conditions above and beyond its unique feature of enhanced magnetic resistance.
In order to ensure high visibility in low-light conditions, the hour, minute and the head of second hands, as well as the indexes have a luminescent coating. Furthermore, the bold trapezoid indentations around the edge of the case are both stylish and functional, ensuring not only a rugged look but a sure grip when using the unidirectional diver’s bezel. Lastly, the watch has an ISO compliant water resistance of up to 200 meters, a 42 hour power reserve, and a daily accuracy of -10 to +20 seconds.
[Product Specification]
※1 ISO: International Organization for Standardization. “ISO 6425 diver’s watch” for all diver’s watches to ensure diver safety.
[About Promaster]

Since its debut in 1989, PROMASTER has become an icon among professional sports watches, known for superior durability and reliability in extreme outdoor environments on land, at sea, and in the air. The three classifications in the series are designed with high-performance specifications and durability: MARINE - for divers, LAND - for climbers, and SKY - for aviation. PROMASTER is exclusively designed for optimum functionality, durability, and safety, inspiring the imagination of generations of active sports aficionados who push beyond physical and mental boundaries

CITIZEN WATCH is a true manufacture d'horlogerie with a comprehensive manufacturing process that extends from creating a watch’s individual components to its final assembly. The company operates in more than 140 countries and regions around the world. Since its founding in 1918, CITIZEN has held the belief of “Better Starts Now” — that is, no matter who you are and what you do, it is always possible to make something better, and now is the time to start doing it. Based this belief, we have created watches, invented and improved technologies and explored the future of watches such as our proprietary light-powered Eco-Drive technology and state-of-the-art satellite-synchronized timekeeping.
* The final design and specifications are subject to change without notice.
* The availability, specifications, and related information, such as the product code for the models featured in this site, may vary by markets. If you would like to know more details, including the availability of these products in your area, please select your local website from our global site.
Share:
Posted by Citizen
Back