A Premium Icon
The release of the Promaster NY008 series in 2018, which was itself based on the iconic Promaster NY004 mechanical diver that was released in 1989, has spawned a number of generations of this iconic diving watch series. Since that time, the watch has been offered on a metal bracelet in 2019, and then after that, with a larger 44mm size in 2020 with the Promaster NY011 series. These launches have been received well by watch lovers, who have welcomed the series for its relative affordability, feature-set and distinctive design.

Now a new model joins the family – the PROMASTER Mechanical Diver 200m – Titanium Technology 50th Anniversary ASIA LIMITED EDITION. While the new watch uses as its foundation, the same iconic design, it comes with a notable difference, a case and bracelet in a material that CITIZEN has been working with for over 50 years – Titanium.

Titanium has long been considered a premium option, with many brands offering titanium watches nowadays, but it wasn't always this way.

In fact, titanium is, relatively speaking, new for the watch industry compared to materials such as gold, platinum and steel. While the benefits of titanium are well-known, the material only received widespread attention in the 1960's during the early days of the space race. At the time, research had gained momentum for its use as a construction material for the spacecrafts of the Apollo program due to its lightweight and rust-resistant properties.

At that time, CITIZEN had also realized that these unique properties of titanium were also suitable for watchmaking. What made titanium even more attractive was one additional property that was particularly well suited - its biocompatibility. What this means is that the material is hypoallergenic and less likely to cause metal allergy reactions to the human body which is especially ideal for a product such as a watch that is worn next to the skin.

This realization was the impetus behind the brand’s intense research into the use of titanium in watches, and the culmination of this work resulted in the first ever titanium watch that was ever made and offered for sale in the world by CITIZEN in 1970, the X-8 Chronometer. 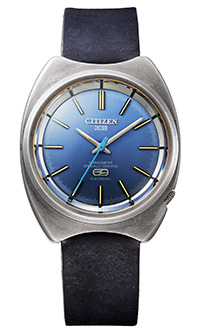 The first titanium watch in the world but only the first step
The X-8 Chronometer was greeted with amazement by the world, but the reception internally within the company was less rapturous. For a watch company with the skills to make watches beautiful through the mastery of various metal-working techniques, the X-8 Chronometer might have been a brilliant technical achievement, but it was not an aesthetic one. After all, the texture of the watch was rough and its colour was dull. It was realized that more work was needed in order to improve the aesthetics of the material for use in watches.

To this end, CITIZEN redoubled efforts to master the three main challenges related to titanium processing - pressing, machining and polishing.

Due to the reactive nature of titanium, with oxygen and nitrogen in the air, when it was pressed, it would stick to the mould making it unusable.

Furthermore, when it was machined, the titanium filings would adhere to the cutting tools causing friction. Lastly, the structure of titanium crystallites in the material made it impossible to use normal polishing techniques since the result was an orange peel effect instead of the smooth shiny surface that was desired.

With these challenges to face, the already monumental efforts to create the first titanium watch in the world - the X-8 Chronometer - were increased. The result of these efforts was new processes to work with titanium that were invented, with the goal to solve every one of the challenges that were encountered when working with it.

Over time, as the company’s mastery of the material increased with each innovation, new watches would be released to showcase every leap forward. 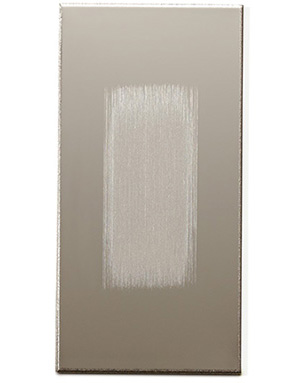 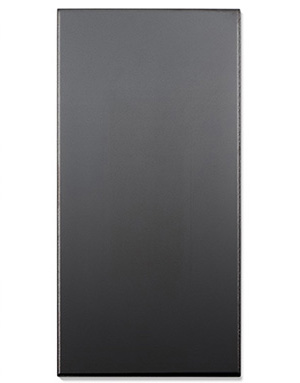 In 2000 came the most significant breakthrough, the debut of Duratect, CITIZEN’s proprietary surface-hardening technology. Finally, this was the invention that would overcome the remaining hurdles that had limited the potential of titanium - the fact that as a material it lacks any natural lustre and also gets scratches easily.
Super Titanium™*1has been the perfect solution, since it offers more than five times the surface hardness of stainless steel and therefore provides high scratch resistance, as well as the possibility of a wide variety of color variations. Aesthetically, it also enabled a smooth, mirror-like finish, allowing a watch made from the material, now known as Super Titanium™, to have all the ideal characteristics that would make it a comfortable, lightweight, hypoallergenic and attractive experience.
To commemorate this achievement, the ASPEC World Time was introduced in 2000, which was the first titanium watch treated with Duratect*2.
An Icon celebrated in Titanium – the PROMASTER Mechanical Diver 200m – Titanium Technology 50th Anniversary ASIA LIMITED EDITION 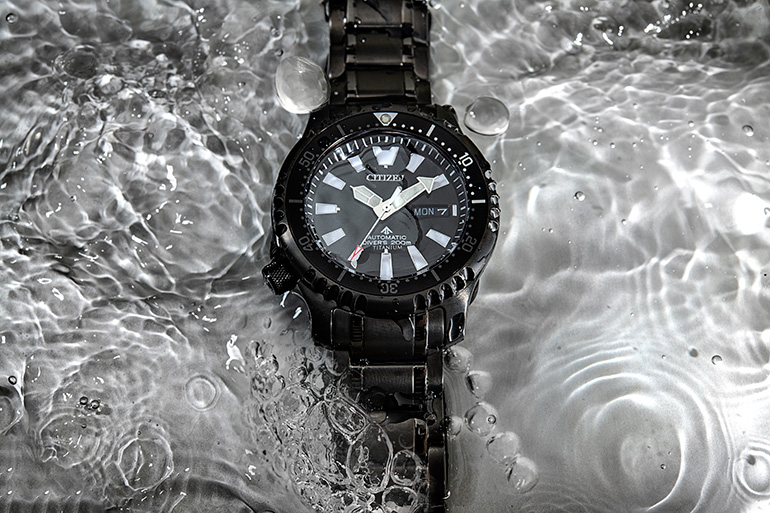 The new PROMASTER Mechanical Diver 200m – Titanium Technology 50th Anniversary ASIA LIMITED EDITION celebrates the journey that CITIZEN has embarked on over the last 50 years to master the use of titanium, and does it while honouring an iconic watch series that has captured the hearts of watch lovers. This new iconic diving watch is now fashioned in a case and bracelet in full titanium black DLC instead of the typical stainless steel, the first time that such a premium option has been used in the series.
Except for the titanium that is used for the case and bracelet, the watch inherits the same technical and aesthetic features that have made the previous generations of the series a success. The new watch comes in the familiar 42mm wide case, with the well regarded and reliable Calibre 8203 movement. The rest of the main features, including the unidirectional bezel, the 200 metres of water resistance and the luminous hands and indices, allow the watch to be in complicance with the ISO 6425 standard for diving watches. 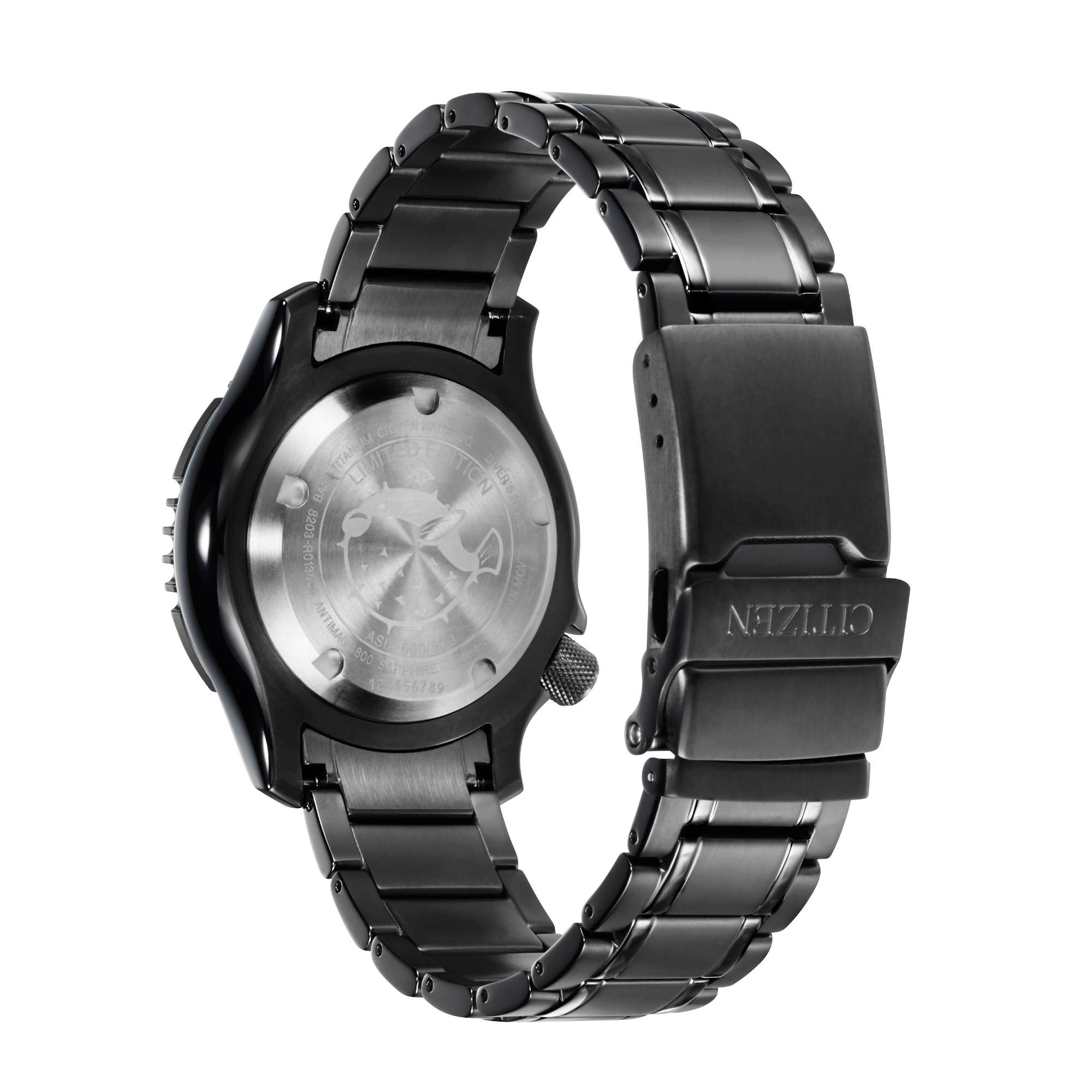 Similarly, the signature feature of the series – a caseback engraving of the “puffer fish” (“fugu” in Japanese) appears on the watch as well, and is placed there in honour and acknowledgement of the nickname that fans have bestowed on the series due to its distinctive bezel design.

CITIZEN’s Super Titanium™ though, adds some critical performance characteristics to the watch, since it is lighter than the equivalent watch in stainless steel, and much less prone to scratches due to the Duratect treatment. This accords well with yet another unique feature, that this watch comes with a sapphire crystal, instead of the mineral crystal as used before, to enable the entire watch to be extremely scratch resistant.
The watch is further coated in black Duratect DLC to emphasize its rugged character, recalling its use in the past by elite special forces units. The bezel is in white for the first 15 minutes of the minute track, while the rest of it is in grey, perfect for timing the initial and most important part of a dive.
Lastly, to emphasize its premium nature, the dial is signed with the word “Titanium”, a subtle indication to its owner that this is a watch unlike any other. Also, the watch will come packaged in the well-known scuba tank shaped box. However, to differentiate itself and to match the unique aesthetics of watch, it will be a special stealthy black metallic version. 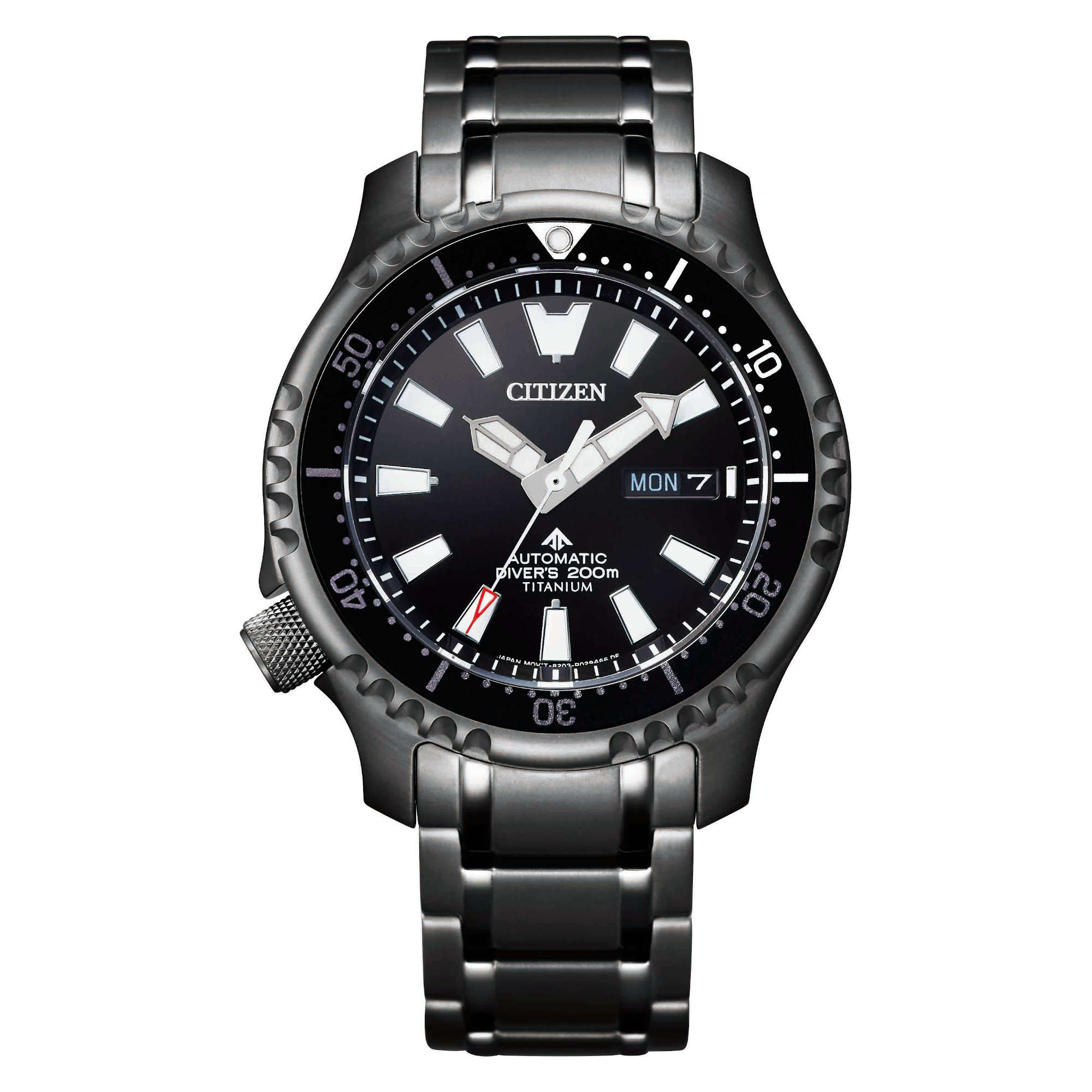 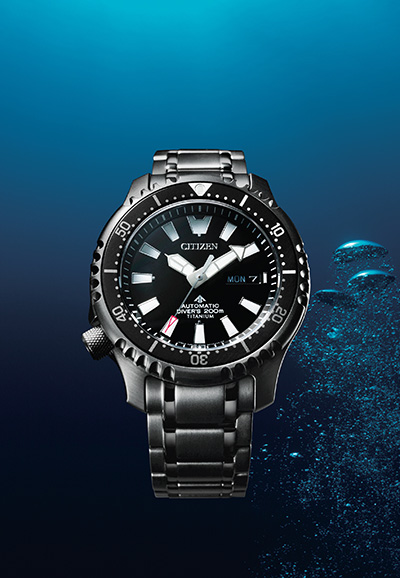 *1 Super Titanium™ is CITIZEN’s proprietary technology to treat itanium with surface hardening technology. It is at least 5 times harder than stainless steel. In the 50 years since CITIZEN introduced the world’s first titanium watch, Super Titanium™ continued to evolve. It is highly resistant to scratches, lightweight and gentle to the skin for wearing comfort. (Vickers hardness of stainless steel is about 200 Hv)
50th Anniversary of Titanium Technology: https://www.citizenwatch-global.com/titaniumtechnology50th/index.html
*2 Duratect is CITIZEN’s proprietary surface hardening technology that enhances the surface hardness of metals such as stainless steel and titanium, protecting watch bodies from scratches and damage. This technology offers excellent abrasion quality and maintains lustre of metals for long periods of time. Duratect DLC achieves Vickers hardness of 1,000-1,400 by coating an amorphous carbon hard film—mainly composed of carbon and hydrogen—on the surface of the material.

Since its debut in 1989, PROMASTER has become an icon among professional sports watches, known for superior durability and reliability in extreme outdoor environments on land, at sea, and in the air. The three classifications in the series are designed with high-performance specifications and durability: MARINE - for divers, LAND - for climbers, and SKY - for aviation. PROMASTER is exclusively designed for optimum functionality, durability, and safety, inspiring the imagination of generations of active sports aficionados who push beyond physical and mental boundaries
[About CITIZEN]

CITIZEN WATCH is a true manufacture d'horlogerie with a comprehensive manufacturing process that extends from creating a watch’s individual components to its final assembly. The company operates in more than 140 countries and regions around the world. Since its founding in 1918, CITIZEN has held the belief of “Better Starts Now” — that is, no matter who you are and what you do, it is always possible to make something better, and now is the time to start doing it. Based this belief, we have created watches, invented and improved technologies and explored the future of watches such as our proprietary light-powered Eco-Drive technology and state-of-the-art satellite-synchronized timekeeping.

* The final design and specifications are subject to change without notice.
* Super Titanium™, Duratect are trademarks or registered trademarks of Citizen Watch Co., Ltd.
Share:
Posted by Citizen
Back